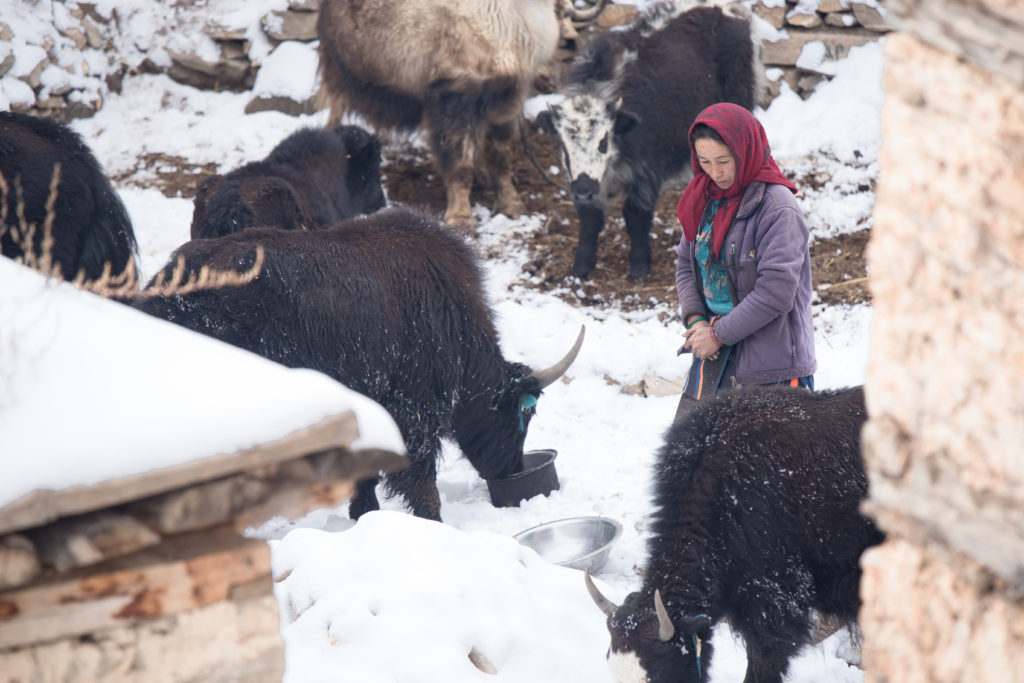 A woman in the remote village of Phoksundo, Dolpo finally feeds her livestock as unpredictable and heavy snowfall has left little fodder to collect in the area. Photo by Sonam Choekyi Lama.

According to the Environmental Migration Portal, more than 400,000 people in Nepal have so far been displaced by natural disasters between 2008-2014. Climate migration is on the surge and Nepal is no exception.

Nepal is the fourth most climate vulnerable country in the world, although it one of the countries that contributes the least to global emissions. Different communities in Himalayan, Hilly and Terai regions are facing migration due to climatic hazards. Locals of Dhye village in Upper Mustang have started migrating to places with access to water resources. Women in Kavrepalanchok and Khotang districts have been bearing the brunt of changing climate following acute water scarcity in their communities. As a result, reports show that women from Kavrepalanchok have actively migrated to countries in the Gulf in search of better livelihood opportunities. The marginalized Dalit communities in Bajura district in far western regions are equally at the forefront. Severe crop failure in Muktikot village that once depended on local crop production has pushed farmers to extreme poverty. Not a single home in the village is untouched by a culture of young men going to India for seasonal labour migration. Recurring floods during the last monsoon period in Sindhupalchok district have swept away settlements and displaced many local communities. However, data concerning climate migration in many parts of the country is sparse especially in climatic vulnerable areas and regions with rough terrain and geographical remoteness.

To address these vulnerabilities, effective policies/projects for adaptation and mitigation should vary based on the needs and feasibility of cities and regions. These projects and its implementation should go in tandem in order to regulate them sustainably. For instance: in the context of Nepal, disaster variability differs from Terai, Hilly and Himalayan regions however, climatic impacts on agriculture are visible across the board. Therefore, it will take a multifaceted approach to understand, address and tackle climate induced crises accordingly. Moreover, city representatives should actively coordinate with local level representatives in order to build effective communication and leverage implementing bodies in adaptation and mitigation programmes.

Climate migration could not be curbed without addressing climate change as the root cause. Despite the findings of the IPCC report which unveiled staggering climate threats in future, there is still an underlying hope to limit the 1.5-degree threshold through rapid climate action. One of the effective steps cities could take in cutting emissions is to invest in green and carbon-free infrastructures. The role of cities stands stronger in terms of building climate resilient infrastructures such as smart cities and proper early warning systems. Formulating climate resilient and gender responsive policies is a major benchmark to adopting an inclusive approach to address climate impacts in a more holistic manner.

When it comes to climate action, young people have a pivotal role to play to implement policies through activism and constructive dialogues. Thus, young people should be provided platforms to express and have their say in climate policies. Designing school curriculum that impart knowledge on environment conservation, climate change and urban planning could be helpful to sensitise and motivate young people. Creating spaces to discuss and debate, share knowledge, exchange ideas and solutions on the climate crisis is crucial.

Young people’s roles in science innovation and advanced technology are significant to breakthrough climate solutions. Since they are more likely to suffer the consequences of climate change in their lifetime, their engagement in climate action should be strengthened. In the context of Nepal, the youth population has been at the forefront of climate activism which is sparking climate awareness and movements. Nevertheless, their voices need to be louder and clearer in policy-making at local and national levels. Young people are key actors in addressing the climate emergency. Therefore, they should be trained to tackle probable risks. Nepal as a climate vulnerable country could accelerate its move to climate action through state representatives providing seed funds to young people to encourage innovation and help initiate eco-friendly ventures and ideas. Young people’s vigour and vision to instigate social change through education and entrepreneurship is what countries like Nepal can fully utilize and confidently invest in.