“Democracy doesn’t happen by accident. We have to defend it, fight for it, strengthen it, and renew it”

Joe Biden, President of the United States of America

On December 9-10, 2021, President Joe Biden of the United States of America, held the first of two Summits for Democracy. The event brought together leaders from government, civil society, and the private sector in a shared effort to set forth an affirmative agenda for democratic renewal and to tackle the most significant threats faced by democracies today through collective action.

The Summit for Democracy illustrated the Biden-Harris Administration’s commitment to putting democracy and human rights at the heart of U.S. foreign policy. Convening a broad and diverse group of world leaders from government, civil society, and the private sector at a virtual Summit for Democracy, the event focused on three themes:  strengthening democracy and countering authoritarianism, fighting corruption, and promoting respect for human rights.

As part of the Summit for Democracy, and in partnership with the governments of the United States, Germany, The Netherlands, the German Marshall Fund, and the Woodrow Wilson Center, the GPM has organized the side event “Mayors Delivering Democracy Daily.” The event held on December 6th, 2021, consisted of a conversation about democratic innovation with mayors from and around the world.

The discussion topics ranged from strengthening democracy against authoritarianism to combating corruption as well as diversity, inclusion, and human rights. Speakers included GPM Chair Mayor Peter Kurz of Mannheim as well as GPM Mayor Ahmed Aboutaleb of Rotterdam, alongside mayors from around the world. The sessions were moderated by Jonathan Capehart, Editorial Board & Opinion Writer for the Washington Post, and MSNBC anchor and host of “The Sunday Show with Jonathan Capehart”. GPM Mayor Yvonne Aki-Sawyerr of Freetown was invited to the topic of democracy in cities and the role of mayors during Covid-19 on the Summit's main program for national governments.

“Mayors Delivering Democracy Daily” was a city-focused side-event of the Summit for Democracy, organized by the Biden administration. The Summit for Democracy brought together leaders from government, civil society, and the private sector to set forth an affirmative agenda for democratic renewal and to tackle the greatest threats faced by democracies today through collective action. Leaders were encouraged to announce specific actions and commitments to meaningful internal reforms and international initiatives that advance the Summit’s goals.

In 2023, the Biden administration will host a second Summit for Democracy. Ahead of this event, the GPM, German Marshal Fund, and the Pact of Free Cities have developed a Global Declaration of Mayors for Democracy, which unites cities in their commitment to shared democratic values.

“In Germany and Mannheim, we have robust systems in place to prevent and address corruption, which we are always working to improve, including the implementation of a whistleblower system right now. However, even though discussions about corruption take a different shape in Germany and more broadly the Global North, this does not mean that corruption is absent. Creating a culture of openness and critical faculties inside city hall, and involving citizens not only creates better results, it limits the danger of corruption. This, along with transparency and accountability, are key priorities in our city administration because it is important that our residents understand the work that we do in city hall and trust that we are working in their best interest, and especially that their voices can make a difference. To his end, Mannheim uses public participation to set priorities and for implementing projects. Besides easily accessible public reports, the involvement of all stakeholders is an effective tool to strengthen transparency.”

Peter Kurz, Mayor of Mannheim, Germany; Chair of the GPM

“A democracy, like freedom for instance, requires a constant attention and care, but an empty container. It’s a set of values that requires permanent maintenance, especially on the local level. We are the level of government closest to our citizens, and maintaining democratic values is always a work in progress. Of course, we need to provide high quality public services and actively reach out to our citizens because democracy only works if citizens are actively involved, not only at the beginning of making policies and plans but right through the execution. So not only to give their opinion, but also to have an opportunity so Mr. Chair this is the word for today, to move from co-creation to co-decide. You make your system less vulnerable if you allow your citizens to go decide with you. That is important as a building block of trust in government.” 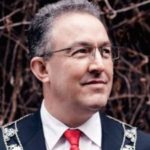