In collaboration with the British Council’ the GPM is giving a platform to youth voices to share their perspective on climate related migration. This blog series is part of the joint project “Uniting Mayors for Local Solutions to Global Climate Challenges”, in partnership with the British Council as part of The Climate Connection global programme. Find out more here: https://www.britishcouncil.org/climate-connection 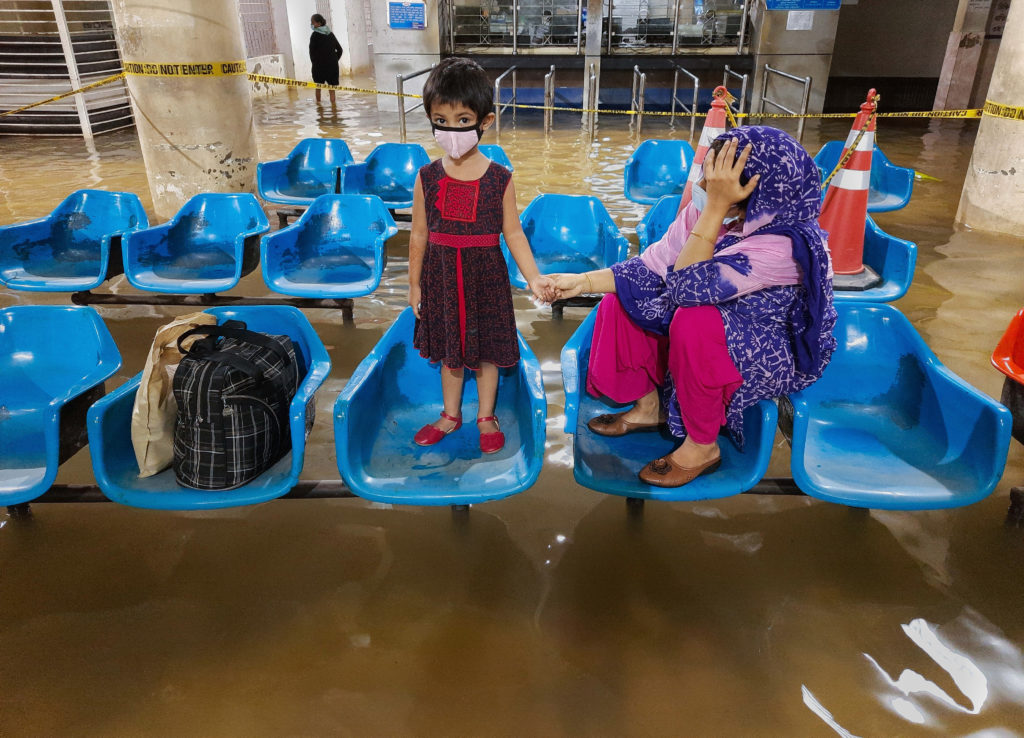 Mother holds on to her daughter while they wait at the ground floor of a hospital in Chattagram, submerged in floodwaters. Photo by Ziaul Huque, winner of the Planet in Crisis category of “A Better Tomorrow”, organised by the British Council, the British High Commission, and the Embassy of Italy, in cooperation with Drik Picture Library Bangladesh, Picture People UK, and Fondazione UniVerde Italy.

“I love my village, Khotang, but I couldn’t survive there much longer,” said Dambar Rai, 55, who left his village at the age of 25 and is now living in Kathmandu. In an interview with me outside his makeshift house made of corrugated iron on the outskirts of Kathmandu, Rai expressed the sorrow he felt at having to leave his village since there was not much he could do with the barren land he owned due to the effects of climate change.

Rai was young when he left the village to look for work in Kathmandu. “I don’t want to return to my village,” he said. Dambar’s older brother and two younger brothers also left the village and moved to Udaypur, Jhapa, and Kathmandu when it became clear that there were no opportunities for them on their land.

30 years later, Dambar’s nearly 100 ropanis (5 hectares) of land is still barren. The drought that began when he was young never eased, and with no water supply or young people interested in agriculture, no crops grow in the village, Damber said.

People have been migrating for years due to poverty and changes in weather patterns. All these factors have now been identified as climate-related hazards and are resulting in increased mobility from rural areas to cities around the world.

Every year thousands of people leave their villages for the city to get an education, find employment, due to natural disasters, to build a better life for themselves and their families, or to further their careers. In most rural areas, agriculture remains the only source of employment and livelihood for most communities. Many young people make the decision to seek a better lifestyle and new opportunities in the city. Farming is hard work, and takes an enormous effort to yield enough at the end of the year. And as climate change affects weather patterns, sustaining a livelihood in rural areas becomes even more difficult, leaving many young people frustrated and feeling vulnerable. In the city, young people hope to find better opportunities, a brighter future, and a greater chance at happiness.

In Asia, many studies have shown that glaciers are melting at an accelerated rate across the 1,500-mile-long Himalayas. Land once used for growing vegetables has become barren.

According to a study by the Internal Displacement Monitoring Centre, South Asians are among the most vulnerable to the impacts of climate change. Last year, after an unusually weak monsoon, water nearly ran out in Chennai, one of India’s biggest cities, their research found. Furthermore, over the last decade, nearly 700,000 Bangladeshis were displaced on average each year by natural disasters.

Rural displacement to the cities is often painted in a negative light and people often point to the negative impacts it has on society: overcrowding, social exclusion, and poverty. However, as part of the British Council Women Reporters for Climate Change Grant project, I  documented three success stories of young people and their climate action. One young climate defender from XXX set up a recycling business in Kathmandu. If she and her parents had not moved from the village for education, I wonder, would she have received the education and opportunity to run a waste management company? Similarly, Kushal, at the age of 18, went to the city to study agriculture and returned to his village to practice climate-friendly, indigenous farming. Would he have been able to do sustainable farming through primary education alone?

The answer is perhaps no. But sometimes displacement also gives us reason for hope. Although displacement is usually discussed as a negative consequence of climate change, we see that coming together in cities also exposes young people to new ideas and new opportunities on how to improve the planet and make a better future for society.