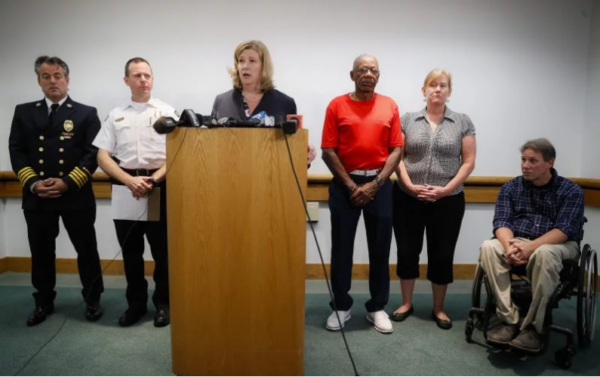 “To be awakened in the middle of our night to a mass shooting and the 250th shooting in our country this year happened in Dayton. What really goes through my mind is one seems completely preventable, and I question ‘When is enough, enough?’” Dayton Mayor Nan Whaley during the press conference on the mass shooting that took place on Sunday, August 4 in Dayton, Ohio.

Thirteen hours before, number 249 in 2019 alone, occurred in El Paso, Texas that claimed 20 lives so far and left 26 others injured. Mayor Whaley addresses rightfully so that Dayton is number 250 of the massshooting and asks the question to all D.C. officials, why laws have yet to be changed after over 200 cities have experienced mass shootings.

Ohio Senator Sherrod Brown called for the Senate to pass the Background Check Expansion Act that would require universal background checks for firearm transfers which has stalled in the Senate after being passed in the House in February. If the House passed the act, it would require universal background checks, including on gun transfers between private parties.

As the community of Dayton comes together, Mayor Whaley discusses how the city and the community goes through the after math of the mass shooting “The word I use for Dayton is, it has ‘grit (..) I think that that is what makes us so strong and continues to make us resilient. And so I’m proud and I think that describes Dayton and its people in a way that I’m very, very proud of.”

Only three months ago, more than a dozen tornadoes ravaged the city of Ohio. Mayor Dayton has expressed her amazement to the strength of Dayton’s community. The GPM stands in solidarity with the GPM member Dayton (Ohio) and El Paso (Texas). These are acts of violence against humanity, crimes of hate and calls for the urgency for responsible gun control, tighter gun safety laws.