Global Declaration of Mayors for Democracy Reaches Milestone of 100 Signing Mayors as U.S. Secretary of State Blinken Calls on Mayors to Sign

The 100th signature was confirmed just as U.S. Secretary of State Anthony Blinken called on mayors to sign the declaration at the U.S. Conference of Mayors Winter Meeting. This marked the first time that a United States Secretary of State addressed American mayors in this forum, demonstrating the growing recognition of the power of urban diplomacy in Washington.

GPM Chair Mayor Peter Kurz of Mannheim (Germany) stated: “The GPM applauds Secretary Blinken’s recognition of the Global Declaration of Mayors for Democracy and calls on other national governments and international institutions to recognize the power of local action and urban diplomacy. The GPM is committed to supporting the Declaration’s 100 signatories as they endeavor to strengthen democracy and stand up to illiberal forces locally and around the world”.

GPM Executive Committee Member Mayor Marcin Krupa of Katowice (Poland) said: “It is mayors and local communities that are the most effective in defending the pillars of our democracy. We – mayors – are currently observing negative trends and facing limited resources but we will not be marginalized and will continue to deliver in this context”.

Cities are on the front lines of the fight to preserve liberal democracy and defend against attacks on free expression. Drawing from their cities’ shared identity as champions and centers of democratic development, the signing mayors reaffirm their unwavering commitment to rebuilding and reinforcing democracy, standing up for free and fair elections at home and abroad, defending the rule of law at all levels of government, and addressing urban challenges through the lens of democracy and democratic values.

As a result of the work of the Urban7, the Declaration of Mayors for Democracy was highlighted in the G7 Ministerial Meeting on Sustainable Urban Development Communiqué in September 2022 as an important example of cities taking responsibility for global challenges and playing a critical role in democratic innovation.

The declaration builds on a previous initiative on the mayors of Budapest, Bratislava, Prague, and Warsaw, who saw the growth of illiberal forces eroding democracy in their respective countries and united to develop the powerful Pact of Free Cities in 2019. The declaration’s origin is in the commitments mayors made at the 2021 Summit for Democracy, hosted by the U.S. government in partnership with the Dutch and German foreign ministries, the GPM, and GMF Cities.

To learn more about the Global Declaration of Mayors for Democracy, please refer to the GPM webpage on the declaration. 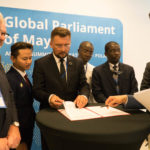 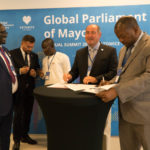 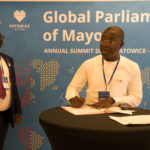 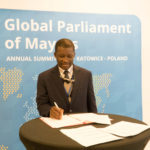 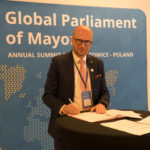