1 April 2021 – The GPM is very proud to announce that GPM Mayor Leoluca Orlando of Palermo, Italy, has been awarded the Freedom from Fear Award, an annual award presented to acknowledge achievements of those who demonstrated commitment to the principles. It is part of the Four Freedoms Award, which is based on four freedoms advocated by President Roosevelt. 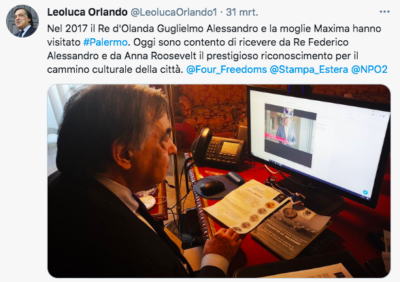 The award for Mr. Orlando is motivated by his unremitting dedication to defend human rights in general and the humane treatment of refugees in particular. During his career he has successfully and with great resolve and determination acted against the mafia, corruption and the death penalty. For many years now he is the most prominent advocate of a hospitable and human approach of the issue of immigration in Italy and Europe.
Sicily has long been at the crossroads of Africa and Europe, the Middle East, and the Americas. For hundreds of years, the Muslims, Christians, and Jews lived in harmony. During the refugee influx, Mayor Orlando personally greeted migrants who arrive in Palermo’s harbor. He considers that it is his responsibility to welcome refugees at the port of Palermo and treat them in a humanitarian way. He also offered to open Palermo’s local port for the migrants; however, it was declined by the Italian Coast Guard. Under his leadership as mayor, he has tackled the corruption in the city administration of Palermo and the city was transformed into a vibrant and culturally interesting place to live and work and an attractive destination to visit. As a politician, an administrator and a human being Mr. Orlando considers it his responsibility to welcome refugees on the quays of Palermo and treat them in a humanitarian way.