Mayors as Drivers of Change

Amsterdam, Rotterdam, and Utrecht have followed The Hague’s example in becoming members of the Global Parliament of Mayors (GPM), which promotes pragmatic solutions to global problems. Mayor Pauline Krikke of The Hague hopes that other cities will soon follow suit: “The larger the GPM is, the more effective its voice will be.”

The worldwide platform of mayors is the brainchild of American political scientist Dr Benjamin Barber, who passed away last year. He wrote the book ‘If mayors ruled the world’ in 2013, and posits that mayors should be the designated leaders in solving global issues such as climate change, security, and migration. As mayors, they already act pragmatically and can, therefore, succeed where states fail.

Barber’s ideas inspired hundreds of mayors worldwide, and in 2016 led to the founding of the GPM in The Hague. Over 63 mayors and city representatives were present for this inauguration, which was hosted by former Mayor Jozias van Aartsen. A few months ago, the GPM was formally registered as an association in The Hague. “This fits seamlessly within our profile as the international city of peace and justice,” Krikke explains. 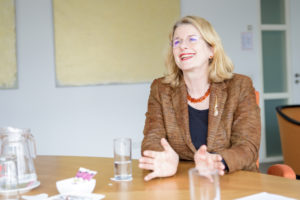 Impact
Krikke: “In order to increase the GPM’s impact, it is important that more and more cities become members. It make s a huge difference whether a platform speaks on behalf of dozens or hundreds of cities. The larger the parliament, the more attention it will command. In this light, I think it is great news that after The Hague, the Dutch cities of Amsterdam, Rotterdam, and Utrecht have also announced that they will join the GPM.”

The GPM offers membership for every city in the world, large or small, north or south, developed or emerging, as long as they support the core values. Cities that have joined from the outset are, in addition to The Hague, Atlanta (USA), Cape Town (South Africa), Palermo (Italy), Bristol (UK), Mannheim (Germany), Kandahar (Afghanistan), Hoima (Uganda), Stavanger (Norway), Warsaw (Poland), and Gjilan (Kosovo). The membership fee is based on the Gross National Income (GNI) and the number of inhabitants. The association has set a goal to grow to a hundred members this year, and its long-term ambition is to grow to a thousand members by 2030.

According to Krikke, the GPM reflects the current trend of cities being increasingly pivotal in offering solutions for national and international issues. “Strong cities make for strong countries. Look at the Netherlands, where the growth in population and economy are projected to take place in cities and urban regions in the coming years. And cities are embracing an international role. When the American President Donald Trump dismissed the Paris Climate Agreement, cities in the United States stood up in defiance and committed themselves. During his recent visit to The Hague, Secretary-General of the United Nations, António Guterres, also pointed out the shift in power relations in the world from national governments to cities and companies. If it is increasingly up to cities to come up with solutions for major issues, it is very important that mayors can connect with each other quickly.”

Healthy cities
One of the main themes this year is healthy cities, which addresses urban health pandemics and the effects of climate change on the health and habitat of urban dwellers. Krikke: “It affects city residents much more. Poor air quality is one of the main causes of death in cities. We have to reduce that. The Hague is located in one of the most densely populated regions in the world, the Rotterdam-The Hague Metropolitan Region. We, as a city, are obliged to address the problem of air pollution for our inhabitants. In addition, as the city of peace and justice, we bear extra responsibility. That is why, as a mayor, I want to work on achieving the environmental and climate goals of Paris. Within the GPM, mayors can keep each other sharp and exchange experiences.”

Other urban network organisations, such as the C40 and ICLEI (Local Governments for Sustainability), are also actively promoting healthy cities. The United Cities and Local Governments (UCLG) covers several additional themes. The GPM does not aim to operate independently from these organisations, instead, as a worldwide mayors platform, it can support their work and reinforce their message. In addition, the platform works together with continental networks, such as EUROCITIES and the US Conference of Mayors. The GPM is looking for similar partners in Asia, Africa, and South America. The goal is not to further its own organisation, but to gain the formal and informal recognition of the role that cities play in solving world problems. To that end, the GPM has signed up for the Global Task Force of Local and Regional Governments and aspires to have a seat in the United Nations.

The themes of the GPM are determined annually during the Mayors Summit. In 2017, it took place in Stavanger, and in October 2018 it will take place in Bristol. In addition to healthy cities, GPM is focusing on safe cities and inclusive cities this year. The terms ‘parliament’ and ‘platform’ are used interchangeably. The GPM is not an elected parliament, but the members do have the right to vote. Through a Virtual Platform, they can vote on both organisational matters and themes. Each city has one vote, regardless of the number of inhabitants. There is an Executive Committee of nine members, and its first chairman is Mayor Patricia de Lille of Cape Town. Former mayors that have contributed to the GPM ideology can be invited as honourable members. They have an advisory role, but no voting rights. 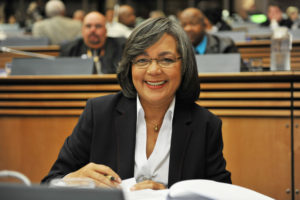 egacy of Dr. Benjamin Barber is kept alive by the Dr. Benjamin Barber Global Cities Award, which is awarded annually. It was awarded for the first time during the Mayors Summit in Stavanger in October 2017. Mayor Leoluca Orlando of Palermo received the prize for his ceaseless efforts to help the countless refugees stranded in Sicily. According to Chair Patricia de Lille, the refugee situation is one of the areas in which mayors can make a difference by advocating for this vulnerable population group. In her latest annual report, she writes: “We live in an uncertain, unstable world. However, I firmly believe that cities are the drivers of change. Strong mayors drive solutions in their cities in ways that are more progressive, faster, and more targeted than those put forward at a national level.”

Mayors Summit Bristol
The third Mayors Summit will take place from 21-23 October 2018 in Bristol, UK. The GPM expects about a hundred mayors and many representatives of other city networks, NGOs, thematic network organisations, and international organisations, such as the World Economic Forum (WEF) and the UN. The program includes the themes inclusive cities, safe cities, and sustainable cities. In addition, network alliances will be discussed. The Summit is also open to non-members.