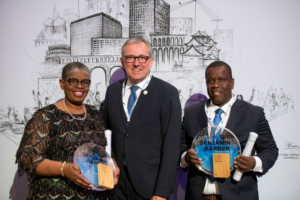 Bristol – 21 October. The 2018 Annual Summit of the Global Parliament of Mayors kicked off Sunday evening at the Bristol City Museum and Art Gallery by awarding not one by two Dr. Benjamin Barber Global Cities Awards.

Mayor Zandile Gumede of Durban, South Africa was awarded for her devotion to human rights, health, safety, water and sanitation, and Mayor Daviz Simango from Beira, Mozambique was awarded for his leadership, transparency, and climate action.

The exemplary work of Mayors Gumede and Simango is about more than just addressing the issues their cities face. They were praised for their brave and ambitious leadership.

Both mayors took the stage for acceptance speeches. “Words cannot tell how much I appreciate this award. For me, I dedicate this award to all the women of the world,” Mayor Gumede said, calling for more women leaders. Mayor Simango echoed her remarks, dedicating his award to young leaders. “Young people can change the world,” he said. Together, their comments will act as driving themes in the Summit.

Gathering mayors from all over the world, the Annual Summit strengthens the voice of cities and elevates city leadership. The Summit is held in a different city every year, fostering partnerships, encouraging investment and promoting the host city. The Global Parliament of Mayors has the ambitious target to grow a membership base of 1,000 cities by 2030, becoming a recognised force for good in the 21st century.

The Global Parliament of Mayors created the award to honor outstanding actions or research on urban governance and contributions to advancing the roles and principles set out by the GPM. The award is named in memory of the founder of GPM, Dr. Benjamin Barber, author of the book ‘If Mayors Ruled the World’ (2014), who passed away in April, 2017.