The Hague – January 14, 2019 – The GPM is deeply saddened to hear of the passing of Mayor Pawel Adamowicz  of Gdańsk, Poland,  after being stabbed in the heart last evening during a charity event in Gdańsk.

With his passing, we have lost a progressive and inspiring colleague who was admired and supported by his colleagues and fellow mayors, for his strong voice, devotion and engagement for an open and fair society, and a defender of the core value of freedom of speech and expression. Pawel Adamowicz had been committed to the Global Parliament of Mayors from the beginning and attended the GPM Summits in 2016 (The Hague) and 2017 (Stavanger).

Out of respect of Mayor Pawel Adamowicz, Mayor Orlando has initiated the city of Palermo to put the flag at half-mast tomorrow. The GPM mayors are invited to do the same and to make a strong gesture of solidarity and respect for Mayor Adamowicz and to uphold the importance of freedom of speech. Reaffirming our strong commitment for enhancing solidarity among city leaders, the GPM strongly condemns all acts of violence against local authorities and city leaders, including mayors. 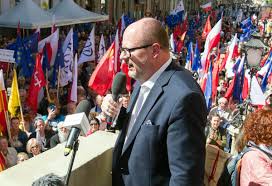