The start of the project “Uniting Mayors: Local Solutions to Global Climate Challenges”

2 March 2021 – On February 25, mayors from around the world came together to discuss the interconnected issues of climate change and forced migration. The virtual session marked the start of the project “Uniting Mayors: Local Solutions to Global Climate Challenges,” an initiative by the Global Parliament of Mayors (GPM) and British Council (BC).

The project is part of the BC’s global program of activities in support of COP26. Leigh Gibson, Country Director Scotland at the BC told the gathered mayors that the British Council aims to make “COP26 the most inclusive ever and to encourage ambitious plans for local action to make change at all levels of our societies.”

Professors Kamal Amakrane (Columbia University) and Sheila Foster (Georgetown University) informed the mayors about the current situation and how it is expected to develop in the years to come. Over 20 million people are displaced each year by the climate crisis. Storms, wildfires, droughts, and floods are pushing people from their homes, and it is often the most vulnerable groups who are impacted. Prof. Amakrane noted that an estimated 200 million people will be displaced for climate-related reasons by 2050. Most of these displaced people will move to cities, meaning that mayors need to prepare now.

Mayors joined the debate, describing the challenges that they face in their own communities. Mayor Rohey Malick Lowe (Banjul, The Gambia) reported that two-thirds of Banjul lies half a meter below sea-level, making the city “the most vulnerable in the country.” She raised concerns about food security and community livelihood in the future.

Mayor Grace Mary Mugasa (Hoima, Uganda) addressed the flooding of Lake Albert, which has displaced thousands. The people most affected by the flooding have been women and children, and the majority of those displaced have moved to cities.

Glasgow’s City Council Leader Susan Aitken acknowledged that the city has been lucky not to be directly affected by climate change in the same way as Banjul or Hoima, but Glasgow is nonetheless committed to addressing the problem. She noted that cities are leading the way on and setting standards for national governments to live up to regarding climate change and migration.

Mayor Ricardo Rio (Braga, Portugal) called for alignment in our approach to challenges at the global level from the European Green Deal to Agenda 2030, noting that cities can − and should − lead the way.

In the coming months, Mayors Rio and Lowe will continue to shed light on this issue and bring mayors together to address these interconnected global challenges. The GPM invites all interested mayors to participate in this project, through focus groups, events, or signing the Call to Action ahead of COP26. Please contact gpm@denhaag.nl for more information about how to get involved. 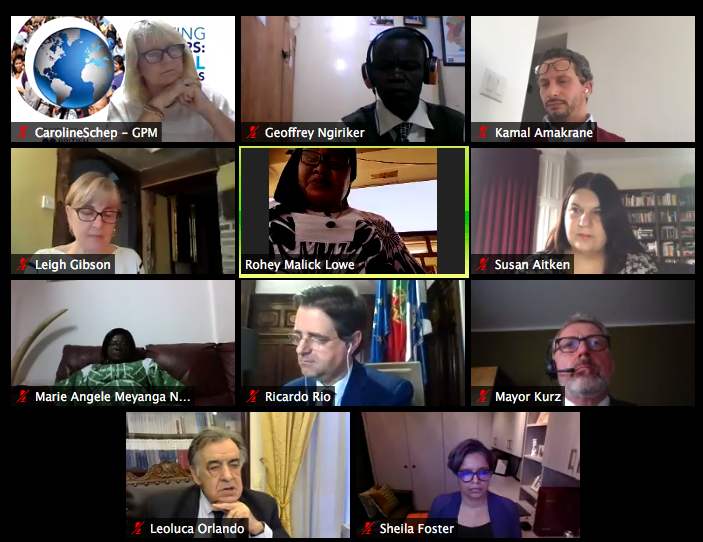