Utrecht silent march “there is no place for hate and violence”

Utrecht silent march “there is no place for hate and violence” 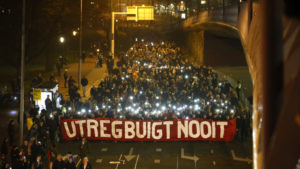 25 March 2019 – On Friday a silent March was initiated by residents from Utrecht, the Netherlands, to show respect to the victims of the shooting that took place during public transport commute Monday morning on 18 March 2019. The turnout was higher than expected with 16.000 people taking part in the silent march. “We’re walking (..) to support victims’ families, to show our sympathy, and to make it known that yes also in Utrecht there is no place for hate and violence,” said Mayor Jan van Zanen. GPM members from The Hague, Amsterdam and Rotterdam, Mayor Pauline Krikke, Mayor Femke Halsema and Mayor Ahmed Aboutaleb, together with Prime Minister Mark Rutte were among those who attended.
On behalf of the Global Parliament of Mayors a letter of Solidarity has been sent to Mayor van Zanen. The GPM strongly condemns all acts of violence. We endeavour for a safer, inclusive and sustainable world by strengthening the rights of cities and enhancing the solidarity among city leaders. The GPM continues to uphold the core value of peace, freedom of speech and expression to combat hatred and violence. Our thoughts and support are with the city of Utrecht.