Katowice, June, 2022 – Over 45 mayors representing 20 countries, leaders of city networks, and representatives of international organisations came together at the Global Parliament of Mayors (GPM) Annual Summit. The event was hosted by Mayor Marcin Krupa of Katowice, Poland, with the title: “Transforming Together: How Cities Must Lead Democratic, Inclusive, and Innovative Global Change.”

Mayors participated in dynamic panels on issues, ranging from democratic processes to migration and social infrastructure in cities. They discussed how they could work together to address some of these global challenges at the local level and push for change in existing governance structures.

Mayor Peter Kurz of Mannheim, Germany, and Chair of the GPM opened the event by observing, “The GPM Annual Summit is a unique opportunity for mayors around the world to come together and discuss key global challenges, explore new ways to work together to address those challenges locally and coordinate our efforts to empower cities. With the theme, “Transforming Together: How Cities Must Lead Democratic, Inclusive and Innovative Change,” the GPM is putting democratic transformations in the center of the debate. And democracy must be at the center of all of our conversations now, not only because of Russia’s War in Ukraine, but also because we are seeing worrying trends toward nationalism and authoritarianism around the world”.

Maimunah Mohd Sharif, Executive Director of the United Nations Human Settlements Programme (UN-Habitat), delivered the keynote address at the Summit, where she reflected on the impact of the Russian war against Ukraine: “The effects of this war are increasingly impacting across the world in terms of rising costs of living, adding to the COVID-19 health crisis and climate crisis – which is and will dominate the needs of many local governments for years to come.” She highlighted that, to overcome these challenges, local action and local governance are key, and said “Leaders can change collectively. We need to take action to support cities, and to build a sustainable future. This is our wake-up call”. 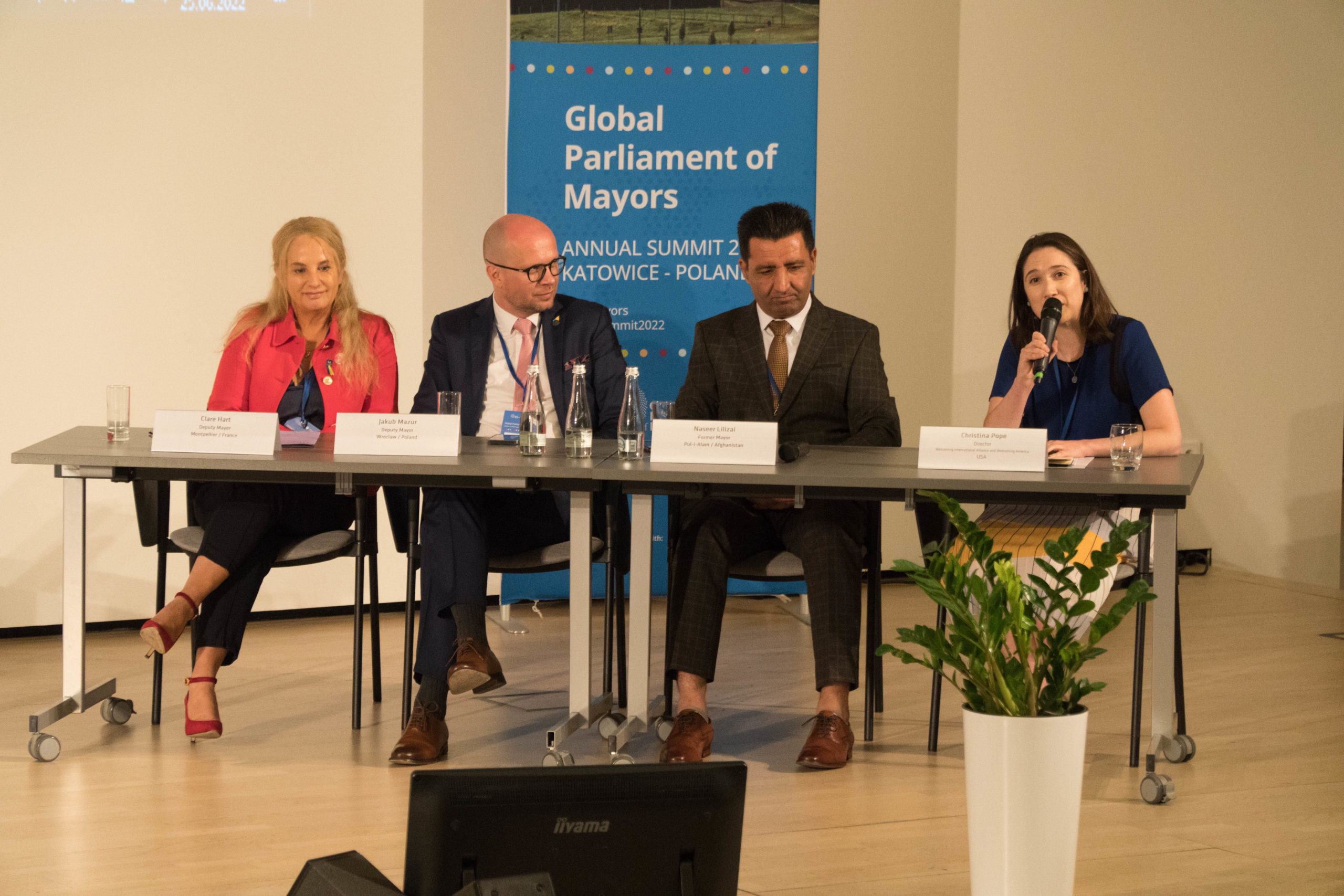 Lamia Kamal-Chaoui, Director, OECD Center for Entrepreneurship, SMEs, Regions and Cities, stated that the price of Russia’s war against Ukraine is high. The war is a new global shock exacerbating pre-existing challenges, such as the climate emergency, persistent inequalities, and growing populism. “Cities – where more than half (55%) of the population will live by 2050 – are on the front line. Resolving these challenges and addressing these transformations requires that we work together. It requires bringing together the sub-national and the national.” She emphasised that cities are crucial actors and can be champions of global change, but need the right framework and conducive environment, and national governments to play their part. The OECD is ready to help ensure cities as incubators of cultural, social, and political change, ”to give birth to the new ideas and innovations that will unleash the power of your cities and shape more democratic and inclusive futures for us all”.

The summit began with a debate on immigration, where mayors discussed the challenges they face and the remarkable work they are doing to integrate immigrants into their local communities. The mayors spoke about refugees of war and the impacts of Russia’s war in Ukraine that they are experiencing locally. Mayors concluded that local governance and democracy are key to welcoming newcomers, embracing them in their new communities and recognizing that migrants strengthen cities and help them innovate. To address the challenges of refugees, partnerships with the national government and international institutions are necessary. Finally, mayors concluded that cities should be better prepared to face new crises by revisiting the capacity to address future shocks, invest in infrastructure, and develop participatory mechanisms.

The mayors then explored the topic of social infrastructure. City leaders have the responsibility to ensure that the cities are create space for people to connect, adapt and grow into a positive future that all citizens want. Mayors discussed the ways in which infrastructure in cities must support the aims of social inclusion, enhancing and protecting natural systems, and bolstering democratic processes. Several speakers observed that mayors can exercise power over the infrastructural procurement process with their ability to convene coalitions of public, private and civil society actors.

Democratic Processes
The Summit concluded with a debate on democratic processes. Mayors discussed the complexity and urgency of the challenges in the urban system, including climate change, social inequality, and the lack of affordable housing. These are challenges that cannot be tackled without the consent, support and collaboration of the population. Urban democracy is about institutions, but also about practices, and it is key to creating sustainable and livable cities.

Ambassador Ivo Daalder, President of the Chicago Council on Global Affairs and Chair of the GPM Advisory Committee, celebrated the commitment mayors made during the Summit by signing the Global Declaration for Democracy which was put forward jointly by the GPM, German Marshall Fund, and the Pact of Free Cities.

Daalder stated that “democracy is under attack around the world, both from the outside as well as from within”. Russia’s invasion to Ukraine and the increasing populist national movements around the world claiming the mandate of the people to obtain and retain power are serious attacks on democracy. But democracy is also struggling at the global level. National governments and international institutions have ignored for too long the voices of those who are democratically elected and the closest to the people. With regard to the latter, Daalder highlighted the dual mission of the GPM “to protect and advance democracy by demonstrating how cities can strive for democratic politics, and to have a voice, and ultimately a vote, at the table of international governments and international institutions to address the challenges that mayors have to solve in their cities”.

At the Summit, the Global Parliament of Mayors awarded the prestigious Dr. Benjamin Barber Global Cities Award to all Ukrainian Mayors, as a symbol of support for their resistance in the face of hostile attacks against and invasions of their cities. The award was accepted by Oleksandr Slobozhan, Executive Director of the Association of Ukrainian Cities.

More information about the award can be found here.